Education Minister Dipu Moni has said that normal education will start in the classrooms of the country’s universities, which have been closed for almost a year due to the coronavirus epidemic, from May 24.

The decision was made at a virtual press conference on Monday afternoon. He said classes will start in all universities after Eid-ul-Fitr on May 24. The dormitories will be opened from May 17. There will be no exams in the universities before May 24. However, online classes will continue. However, the education minister did not say anything about the seven government colleges affiliated to Dhaka University. 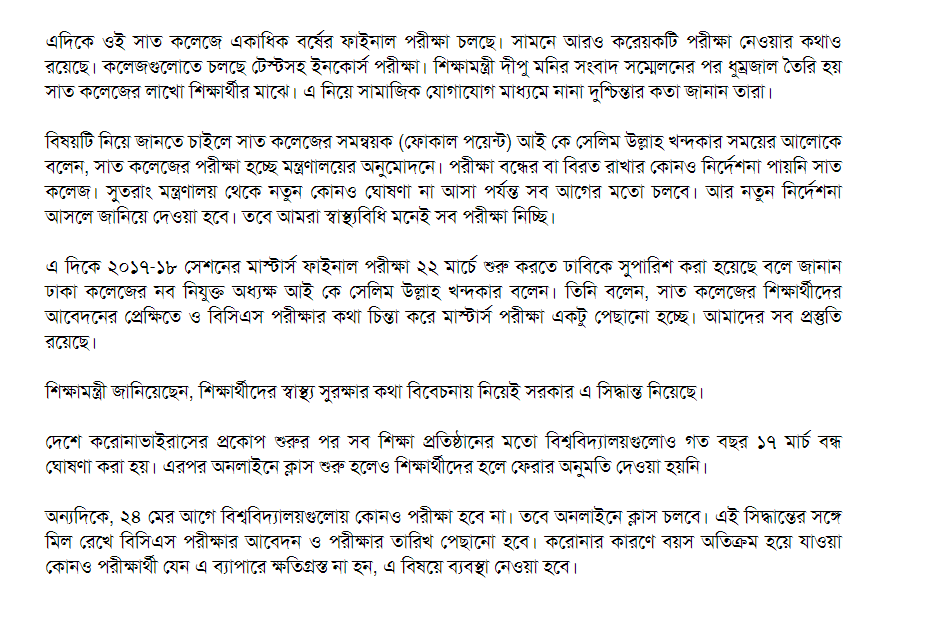 Asked about the matter, the coordinator (focal point) of the seven colleges IK Selim Ullah Khandaker said in the light of time, the examination of the seven colleges is being approved by the ministry. Seven colleges did not receive any instructions to stop or stop the examination. So everything will continue as before until there is a new announcement from the ministry. And the new instructions will actually be announced. However, we are taking all the tests in mind.

In this regard, DU has been recommended to start the Masters final examination of 2017-18 session on March 22, said IK Selim Ullah Khandaker, the newly appointed principal of Dhaka College. He said that in view of the application of the students of seven colleges and considering the BCS examination, the Masters examination is being delayed a little. We have all the preparations.

The education minister said the government has taken this decision considering the health protection of the students.

Universities, like all educational institutions, were declared closed on March 17 last year after the outbreak of coronavirus in the country. After that the online class started but the students were not allowed to return to the hall.

On the other hand, there will be no exams in the universities before May 24. However, online classes will continue. In keeping with this decision, BCS exam application and exam date will be postponed. Measures will be taken to ensure that no candidate who has passed the age due to corona is harmed in this regard.